This month I officially joined BlackBerry, who acquired my previous company Good Technology. We’re starting work on a combined new software platform used by the most security conscious companies in the world to secure all of their applications, data, and communications on any mobile device.

One of the most interesting aspects of this new job (aside from technology) is actually getting to know many of the other businesses within BlackBerry. Many of us know of BlackBerry as a device company. But it is also a very diverse software business. Last week I met with a fascinating team of engineers in one such division of Blackberry called, “AtHoc”. They build mass notification and crisis communication systems;  the kind used by the Dept. of Defense and many other government agencies. They even have a mass notification system in their cafeteria for any time there is free food!

Along with several colleagues from our former company Good Technology, I participated in a Veterans Day Charity Walkathon to support an organization for military families. It was a great opportunity to meet the AtHoc team and many of my new colleagues from BlackBerry.  They even treated us to a fine lunch at the end. But, alas, they didn’t let me trigger a mass notification from the cafeteria this time. 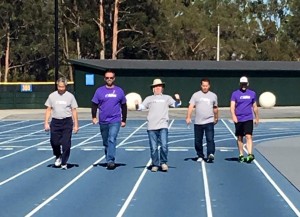 A little background on AtHoc: